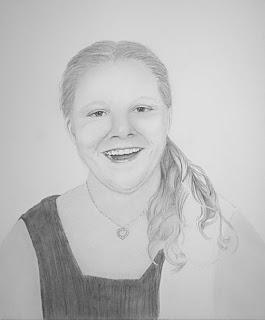 This is the reference I decided on for the background. I found it at a geocities website- Places of Refuge, but have no idea who the owner of the original image is. If he/she stumbles upon my page or someone out there might know, please contact me so I can give an appropriate credit to him/her. 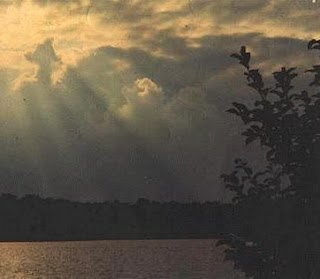 I started shading in the background as seen in the photo reference, but decided that the leaves on the right weren't going to work well with this drawing. It was at this point, where I started blocking out the rays of light, that my ruler transferred the sticky substance to the drawing (see previous post). Because of that, I had to change my approach and go much darker with the background than I intended in order to "hide" the stains. 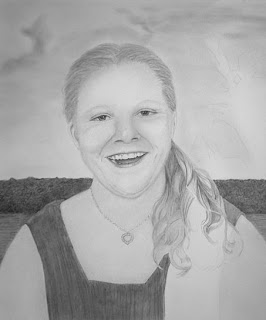 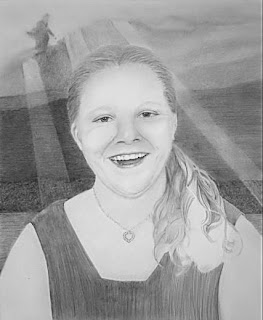 Added a bit more detail to her blouse so it didn't look so two dimensional. Went a little too dark with the background on the right so I'll have to add another layer on the left to keep this in balance. As you can see, I still have to finish laying in her hair too. And her teeth are just a bit too bright. I read somewhere that the whitest part of a portrait should be the hightlights in the eyes. Not the whites of the eyes, but the highlights- the "sparkle" in the eye. 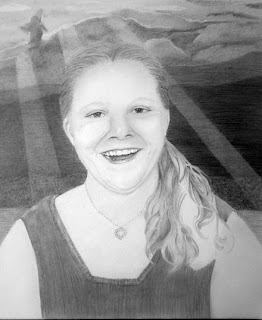 I'm also considering removing the heart shaped necklace and giving her a cross necklace to keep with the "theme" of this portrait. I know Emily from church. She's a sweet young lady, very active with the youth ministry. I wanted to remind her through this portrait that, over seas, forests and mountains, no mater where on earth her life travels take her, our Lord in Heaven is watching over her.
Posted by Unknown at 10:36 AM No comments: 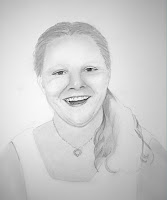 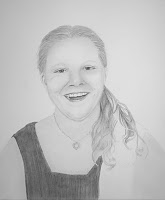 Previous post picture and updated picture. I'm further along than this but I've got some fixing to do before I post the next picture.
It was quite a night for me. More excitement than I'd rather have had.
I was making really good progress on my Emily portrait last night and was starting to work on the background. Then something happened that made me want to cry.
I needed to use my ruler to put in some guidelines for the background. I laid down my first line but when I picked the ruler up, I noticed a couple spots on the drawing. Apparently there was some kind of sticky substance on the ruler--like syrup. I don't know what it actually was, or how it got there, but it had transferred to the paper.

I've had the experience of blowing on the paper and transferring just a spot of moisture and how that can blemish a drawing. That's why I now use my drafting brush to remove any eraser dust. This was sooo much worse! There were at least fives spots total. One was in Emily's hair. That one was bad. It wouldn't lift with the kneaded eraser. I ended up having to scrape it out with an exact-o knife. Ohhh the breaking of the heart! I reworked the area the best that I could and it certainly looked better than the shiny syrupy spot, but it also changed the texture of the paper in that area. I'm going to have to do some experimenting with some scraps of the same kind of paper to see if there is anything more I can do to "doctor" that kind of injury. If I come up with anything helpful, I'll be sure to share it.
The other spots were all within the background area. I was able to lift most of the syrupy stuff to get rid of the shine, but they left behind a dark grey "stain". I was able to work around these and make the tone of the background match the stain so the stain would blend as much as possible. There was one spot that was in a crucial area of the background that is giving me a bit of trouble, but I haven't given up yet. I'm layering, then layering some more, then layering some more until I get it as close as I possibly can.
Stubborn stains- I'm a Taurus, I will not give up easily!!!
Here are my drawing tips for today:

Posted by Unknown at 8:54 AM No comments: 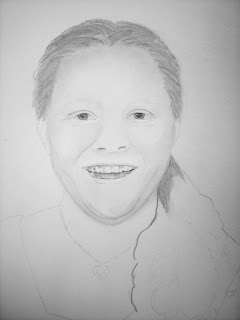 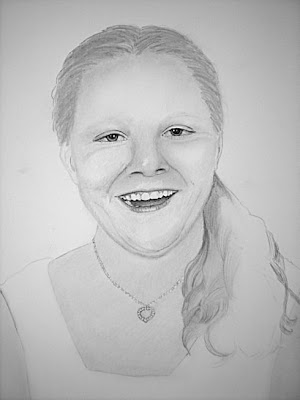 Here is where I left off yesterday and where I am today. I believe I'm starting to get somewhere now. I had to fix Emily's eye on the left, the shape was wrong- too much of an arch in the eyelid. I've always had a problem with staying too close to mid-tones and my drawings would always look flat. That's not a look you want when you're trying for realism! But I think I'm finally getting better at putting more depth into my portraits.

I'm kind of working from the center of the face (eyes/nose/mouth) and outward on this drawing. In the past, I've worked mostly from upper left down to bottom right just because I'm right handed and that's what I've seen done so often. I'm learning, at least with portraits, that it's best to work on the key facial elements first.

I have some minor adjusting to do on the shape of the nose/mouth, it's not quite right yet. I think the mouth needs to be just a bit wider on the right and the nose seems slightly off to me. Overall though, I believe Emily's face is starting to take on some life now! 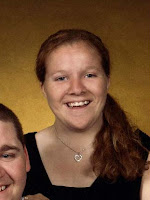 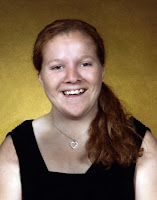 I've started on a new project, a commission of a young lady named Emily. To the left is part of the reference photo I'm using. I did some slight editing of the original photo in Photoshop. The overall lighting isn't very good so I'm going to have to use some imagination to bring some depth to this drawing. I always seem to be a little disappointed with the early stages of my drawings since they don't really look like much . . . I even tend to procrastinate working on them when I get to this point because I get discouraged that I'm ever going to get anywhere. I seem to be having that problem with this one in a very big way. I've made excuse after excuse over the past two weeks NOT to pick up my pencil and move forward. Last Saturday, I had a dream about drawing this portrait and I was so excited when I first got up! I wanted to jump right in . . . but then, after a shower, then after breakfast, then after a little nap, then a movie on t.v., then playing with my grandkids . . . well, then it was bedtime again- so I accomplished nothing on the drawing. Here is what I have so far: 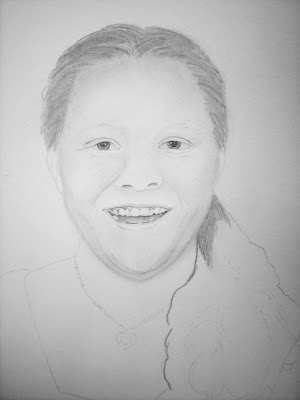 I had another picture that showed off Emily's beautiful, curly hair, but I kind of liked this one because it features her smile and makes her neck look longer. I'm not sure yet what I'm going to do with the background on this. I was thinking maybe a kind of stained glass look or something. I don't know for sure but I'd like it to reflect her personality somehow.

I've promised myself that I'm going to try to get some substantial work done on this tonight... if I succeed, I'll have an update for you tomorrow.

Posted by Unknown at 2:47 PM No comments:

Resources For Artists- My Favorites

I've been really busy this week with work and Vacation Bible School right after work. I haven't had any time for drawing. But I promised myself I'd try to be consistent with updating this blog so I'd like to share with you some of my favorite art resources.

Hope you enjoy browsing these sites!